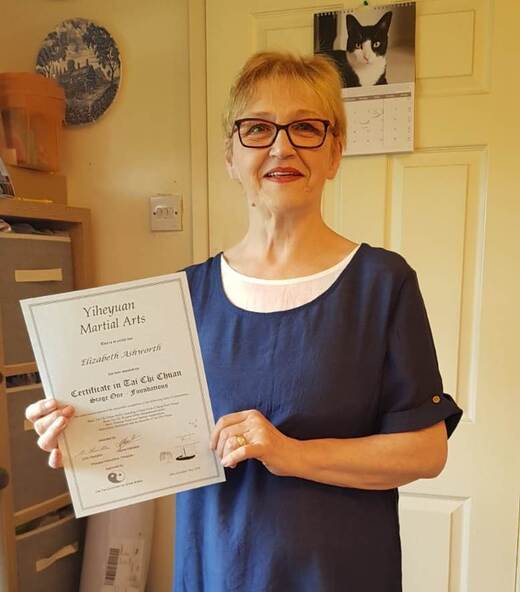 We are so sad to hear of the passing from this world of Liz Ashworth, shown here proudly showing her Certificate in Tai Chi Chuan, which she achieved depite her illness and all the challenges of lockdown. A devoted mother and truly great person who showed incredible courage and selflessness, keeping right on smiling, supporting and uplifing everyone who knew her.

Here is a tribute to her from her teacher, Barbara, on behalf of all her many freinds and fellow students.

"Liz, you were an inspiration to all of us. Your enthusiasm and your wonderful, cheeky sense of humour brought a ray of light into every room. Your Chi is now free to shine down on us every day. To say you will be missed by your Tai Chi family is an understatement. Enjoy your journey, and keep on laughing at us. Bx"
🙌
​

We were devastated to learn of the sudden and completely unexpected departure from this world of our dear friend,  fellow-student and gifted teacher, Paul Fozzard.
Paul was part of our Tai Chi family for more than two decades and practiced the art wherever he went, including at the top of mountains! An intrepid mountaineer, wild water swimmer and a valued and well-respected member of the care profession, Paul was the kindest and gentlest person one coud ever meet. A quiet and thoughtful philosopher, he never had a harsh word to say about anyone and so was well loved by all. To say that he will be deeply missed is an understatement. 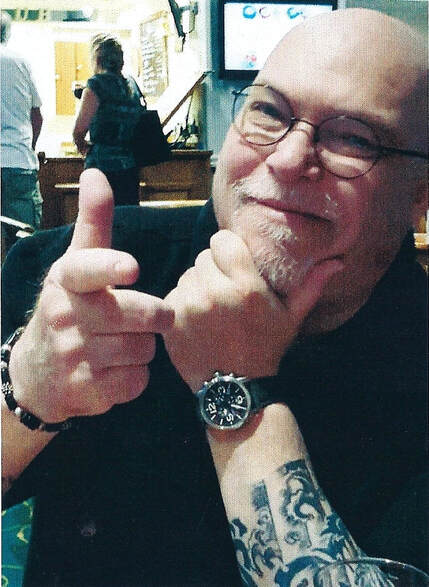 Our long-time student and very dear friend Jonathan Cooper has passed away unexpectedly.
Those who turned up to say farewell filled two chapels to capacity - a testament to how well-loved this man was and how many lives he touched.
​Jon, you are truly a legend and we can't imagine this world without you.
​As you embark on the next stage of the great journey, we wish you well.
​You will always be in our hearts
till we meet again in the quantum substrate or in the Halls of Valhalla! 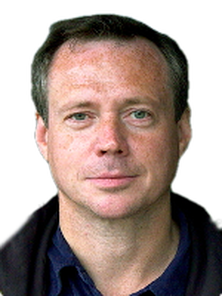 We were sad to learn of the passing of Dan Docherty, an internationally renowned martial artist who was a founder member and long-time Chairman of the Tai Chi Union for Great Britain. For decades, Dan worked tirelessly to promote Tai Chi Chuan throughout Europe and beyond.
Always down to Earth and often outspoken, Dan used his skills as an author, via several best-selling books and  lots of entertaining and informative articles for Combat magazine, to increase public awareness that Tai Chi Chuan is a complete martial art.
While serving as a Police Inspector in Hong Kong and training with his teacher, Cheng Tin Hung, he established a reputation as a fearless competitor in full-contact tournaments.
After winning gold in the South East Asian Open Full-contact Championships, he returned to the UK and founded his  school, Practical Tai Chi Chuan, where he trained many top level fighters as well as hosting the annual British Open Championships every year.
​In short, he was responsible for putting the real gungfu back into Tai Chi Chuan.
A gentleman, a scholar and a warrior.
Rest in Peace Dan. You did good! 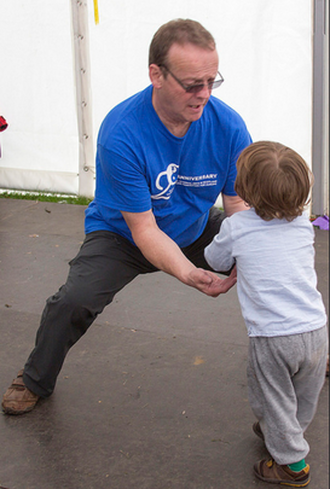 In loving memory of a great man and a great friend, Ronnie Robinson​
who, for decades,  was the heart and soul of Tai Chi in this country, as the Secretary of the Tai Chi Union for Great Britain and as the Editor of Tai Chi Chuan Magazine. He worked tirelessly to raise public awareness of our art via the media, books, events, videos and links with Europe and China.
His Tai Chi Caledonia has become the place to be every summer, attracting instructors from all over the world.

To tell you how much we, all of us, owe to this man - we wouldn't know where to begin. Without him, Tai Chi in this country would not have been what it is today.